This week we call your attention to the Malala fund which is aimed at improving educational opportunities for girls around the world. Help girls in Afghanistan and around the world

Join Malala’s fight to give back to girls what poverty, war and discrimination tried to take away. With more than 130 million girls out of school today, she needs your help to reach the most vulnerable girls denied an education.

Your gift today is an investment in Malala Fund programmes that help girls around the world go to school — from accelerated learning centres for girls across Afghanistan, to training young Pakistani women as activists and providing STEM education to Syrian refugees.

Please join our struggle for indigenous rights around the world.

Find a campaign to work for. Light must be made to shine in the darkest of places. We invite you to join Freedom United        and raise your voice orphanage trafficking.

The Attorney General of the State of Morelos has opened a criminal investigation into the killing of environmental, land and territory human rights defender Samir Flores Soberanes. Mexico’s National Protection Mechanism has also granted protection measures to several other members of his movement.
Share

Samir Flores Soberanes was a human rights defender from the organization Frente de los Pueblos en Defensa de la Tierra y el Agua (Front of Peoples in Defence of the Earth and Water), a grassroots collective dedicated to protecting the environment and territory in the states of Morelos, Puebla and Tlaxcala (Central-East, Mexico). On 20 February 2019, he was shot dead after having previously received death threats in connection with his human rights work.

The Attorney General of the State of Morelos has opened an investigation into his killing, including lines of inquiry surrounding his work as a human rights defender as a possible motive for the crime. The National Protection Mechanism has also granted protection measures to several other members of the Front of Peoples in Defence of the Earth and Water, the movement to which Samir belonged.

We believe that the public campaign on behalf of Samir Flores Soberanes, including appeals sent by Amnesty International members, contributed to these positive developments.

We will continue to monitor the status of the investigations into his killing and will react if further action is required.

All detainees held at the police’s anti-terrorism branch in Urfa province, south eastern Turkey, following clashes between security forces and the armed PKK on 18 May, have been either released or sent to prison custody. The 13 people that were remanded in prison are no longer considered to be at risk of torture or other ill-treatment.

A group of at least 47 people including men, women and three children, were detained during police raids following clashes between security forces and the armed PKK in the early hours of 18 May in Urfa province, south eastern Turkey. As of 24 May, 22 individuals, including the three children, had been released, with bail conditions applied on the adults. According to their lawyers’ testimony and photographs seen by Amnesty International, some of the adult detainees had been subjected to torture or other ill-treatment by police officers at the Bozova Yaylak Gendarmerie command post, Urfa province. Some had been prevented from being seen by doctors without the presence of police officers.

The Urfa Bar Association submitted a criminal complaint to the Urfa prosecutor for torture and other ill-treatment based on detailed interviews with some of these individuals.

Amnesty will continue to call for prompt, independent and impartial investigations into these allegations.

Insidious Discrimination Against The Roma Is Europe’s Shame

We call your attention to a post by Prof. Alon Ben Meir who describes in detail the discrimination against Roma people all over Europe. While we have no specific address for protest, we call upon all of you to post this article on all your social media with the hope that it will go viral and apply pressure to the power structure of Europe.

On 14 June the governorate of Izmir banned all Pride events, followed by the governorate of Antalya the next day. Pride events in other cities have been prevented or are also at imminent risk of being banned, including in Istanbul, where Pride is at risk for the fifth year in a row. This clampdown on the LGBTI community in Turkey has been continuing this year despite this Pride season being the first one after the end of Turkey’s state of emergency in July 2018. The authorities must lift these unlawful bans and ensure that all Pride events are allowed to safely take place. They must protect the right to peaceful assembly without discrimination.

On 9 and 10 June, thousands of Haitians marched in Port-au-Prince against corruption and poverty, some calling for the resignation of President Jovenel Moïse. Amidst reports of excess use of force by the police, and ongoing protests, President Jovenel Moïse should guarantee the right to freedom of expression and assembly, promptly investigate alleged human rights abuses, and bring those responsible to justice.

Seven investigative journalists have been summoned since February for questioning by the Intelligence Services after the Paris Prosecutor’s office opened a preliminary investigation against them for revealing a national defense secret. In April, the online media portal Disclose published the ‘Yemen papers’ regarding the sale of French weapons to Saudi Arabia and the United Arab Emirates and their use against civilians in the context of the Yemen civil war. The authorities have pressured the journalists to reveal their sources, however their actions are protected by the right to freedom of expression and the preliminary investigation against the journalists must stop. 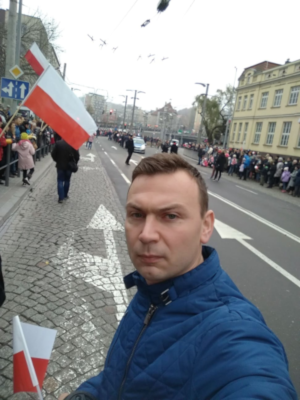 Proud docker and NSZZ Solidarność organiser Marek Szymczak was sacked by Hutchison Ports in Poland in May 2017. Marek was fighting for a safer job for workers at Hutchison’s Gdynia terminal, campaigning for reduced outsourcing, shorter hours and a change in a culture that relied on excessive overtime, and for a collective agreement that guaranteed higher wages and better conditions for dockers in Gdynia. At the time dockers at the terminal regularly worked more than 16 hours a day, in a system where the first 8-10 hours were recorded by Hutchison, and additional hours were billed by an external company. Serious mechanical safety concerns existed in the workforce with deteriorating equipment and diminishing investment. In May 2017, Marek suffered an accident at work. With his doctor’s approval, Marek took part in the international meeting of young dockers in Antwerp in June 2017. Hutchison hired a private investigator to monitor his activities while on sick leave and fired him on the basis of misuse of sick leave entitlements. In the opinion of union members Marek’s sacking was designed to intimidate the workers and an escalation of Hutchison’s union-busting agenda against NSZZ Solidarność and its activists and members. For 2 years, Marek has been fighting for his reinstatement, and now he and NSZZ Solidarność are asking for your help – and international solidarity – to send a strong and clear message to Hutchison Ports to reinstate Marek Szymczak.