This week we call your attention to Global Giving, an organization that connects nonprofits, donors, and companies in nearly every country around the world. “We help local nonprofits access the funding, tools, training, and support they need to become more effective. ”

Find a campaign to work for. Light must be made to shine in the darkest of places. We invite you to join Freedom United        and lend your voice to the call to stop robbery of migrant workers in Malaysia.

Armed men abducted Mexican Indigenous human rights defenders, Obtilia Eugenio Manuel (pictured above) and Hilario Cornelio Castro on 12 February 2019. Their captors released them on 16 February amidst an increasing national and international outcry over their disappearance. They continue doing their human rights work and continue at risk, while their attackers are at large. Both HRDs are members of the Organization of Indigenous Mepha’a People (OPIM, Organización del Pueblo Indígena Mepha’a). Obtilia Eugenio is also an elected member of the Indigenous Municipal Council of Ayutla de los Libres, Guerrero state, in southern Mexico. The authorities must implement protection measures on their behalf, investigate the attack they suffered, and bring those responsible to justice.

Taiwanese activist Lee Ming-che has been given rotten food and insufficient clothing in his freezing prison cell. As a result of exposing these prison conditions, his wife is not allowed to visit him again until 22 April 2019. Sentenced in 2017 to five years’ imprisonment for “subverting state power”, Lee Ming-che is a prisoner of conscience and should be immediately and unconditionally released. Danish national and Jehovah’s Witness Dennis Christensen was found guilty on 6 February of “organizing activities of an extremist organization” and sentenced to six years imprisonment by a court in Orel, western Russia. He is a prisoner of conscience imprisoned solely for peacefully exercising his right to freedom of religion. He must be immediately and unconditionally released, and his conviction must be quashed. 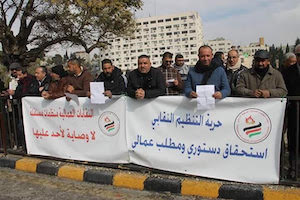 New labor law must recognize workers’ rights. The Jordanian government needs to hear from workers globally that it must ensure its laws comply with ILO fundamental lab our rights, including freedom of association, not make them worse. Please join the protest.

For 374 days, workers and their union at AB InBev Sonepat plant have been fighting union-busting and local management’s ongoing refusal to reinstate unfairly terminated union leaders, and they continue to fight for their rights. Please help the union in its struggle against Budweiser.