This week we turn our attention to call from Amnesty International to alleviate the terrible situation in Yemen.

Countless children and families in Yemen are dying from war, starvation, and disease. Yet the people in power are ignoring their suffering.  They are dying. It is a forgotten war.

URGENT UPDATE: Yesterday, a bus carrying children was hit by an airstrike. Dozens are dead, even more are injured — most are under the age of 10.

Three years into a brutal war, fierce fighting continues to jeopardize thousands of lives in Yemen. Countless children are dying from war, starvation, and disease. Yet their plight is being ignored.

Make an emergency donation right now to help us stand up to those behind the horrific abuses. The fund raising is being done by Amnesty Australia, but donations are accepted from around the world. You may also donate via Amnesty USA.

We would like to recommend donating to the Morris Animal Foundation  who support cancer research for animals, in particular dogs. We have entered our Murphy in the contest to be on the magazine cover. You may vote for him up to five times at $1 per vote with the proceeds going to the Foundation. Look for him among the 11 dogs named Murphy. He looks like this and is listed under owner name Aharon.

This week we call your attention to the banishment of tribal people in India from the forest to create tiger reserves, which is pernicious nonsense in terms of conservation.

The lives of hundreds of thousands of tribal people in Indian tiger reserves are being destroyed in the name of conservation. The Indian government is illegally evicting them from the land where they have always lived and that they have always protected.

They are accused of harming wildlife. But, far from killing tigers, many tribes worship them as gods and take care of their environment better than anyone else. Where tribal people’s right to stay in a tiger reserve was recognized, tiger numbers soared.

Please call upon the government of India to stop the evictions. 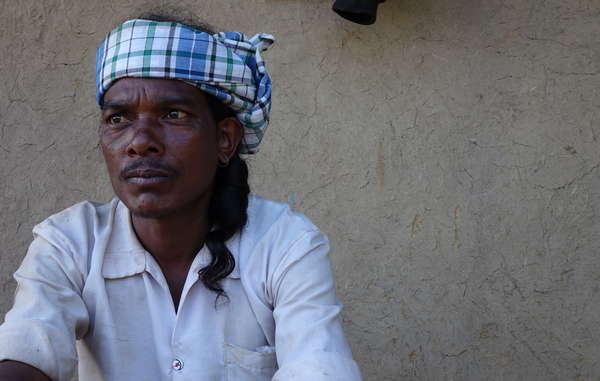 Baiga man evicted from Kanha National Park. Whole communities have been scattered and destroyed. One evicted Baiga woman told Survival: “We were the kings of the jungle, but here they treat us like dogs. It’s only sadness here”.
© Survival

Find a campaign to work for. Light must be made to shine in the darkest of places. We invite you to join Freedom United        and lend your voice to the call to put an end to orphanage child trafficking.

We also call upon you to raise your voice about the rearrest of Biram Dah Abeid who is a leading anti-slavery activist in Mauritania, the country with the highest prevalence of slavery in the world1. The organization he founded, the Initiative for the Resurgence of the Abolitionist Movement2 has fought for the freedom of countless men, women and children.

Mauritania fully outlawed slavery in 2007 but has systematically failed to end it in practice. It has fallen to activists like Biram to fight for people’s’ freedom and they face regular harassment and harsh treatment in their campaigning.

Please call on the Mauritanian government to free Biram Dah Abeid and his fellow anti-slavery activists.

Afonso S. Muatchipuculo (22), António J. Fernando (18) and Justino H. Valente (21) were released from a detention facility 50km away from Malange city on 17 July. This is after the Supreme Court ruled that there was insufficient evidence to prove that they were involved in throwing stones at the Vice-President’s convoy during a demonstration.

The three were arrested on 4 April at the market while on their way home. About 4km away from where they were, at the Malange City Pavilion, the Vice-President’s convoy was met by over 100 protestors demanding the removal of the Malange Provincial Governor upon arrival at the Pavillion. The police chief claimed to have identified them as being among the protestors who threw stones at the Vice-President’s convoy by the colour of their shirts.

They were tried and sentenced to seven months in prison on 9 April in an unfair trial without a lawyer present. The prosecution did not produce any witnesses to provide testimony. The defendants were not given the opportunity to challenge the evidence presented against them, cross-examine the chief of police and even call witnesses.

Helena Mutaleno da Silva, Justino’s sister, thanked Amnesty International, among others, for campaigning for the release of the three youth.

“But beneath the smiles of joy and relief there will be sorrow, anger and a steely determination. Sorrow for all the things Taner has missed during his cruel incarceration. Anger that the baseless charges against him and the Istanbul 10 have not been dropped. And determination to continue our fight for human rights in Turkey and for the release of all those who have been unjustly jailed in the vicious crackdown.

Beneath the smiles of joy and relief there is a steely determination to continue our fight for human rights in Turkey and for the release of all those human rights defenders, journalists and others who have been unjustly jailed in the vicious crackdown

Today we take a moment to celebrate, but tomorrow our struggle will continue, re-energized by the example set by Taner himself: a man who knows the importance of human rights and is willing to dedicate his life to defending them.”

Amada Martínez, human rights defender from the Tekoha Sauce Indigenous community of the Avá Guaraní People in south-east Paraguay, was threatened by three armed men wearing uniforms of the Itaipú Binational (Paraguay-Brazil) hydroelectric plant on 8 August, in the presence of three minors, her sister and a taxi driver.

Military official accuses Venezuelan Indigenous environmental rights defender Lisa Henrito of “treason” – on national television – due to her activism in the defense of the Pemón Indigenous People’s traditional territory.

Human rights defender Juana Raymundo went missing on the night of 27 July in the Quiché department in northwest Guatemala and her dead body was discovered the next day. She was 25 years old, and a member of the Campesino Development Committee (Comité de Desarrollo Campesino, CODECA). She is the 8th human rights defender killed in Guatemala in less than three months.

Shahidul Alam, photographer and outspoken social activist, has been charged under Section 57 of Bangladesh’s Information and Communication Technology Act after giving an interview to Al-Jazeera on the current wave of school student protests in Bangladesh. Detained and charged solely for exercising his right to freedom of expression, Shahidul Alam must be immediately and unconditionally released.

No rights for workers at Marriott’s Bali paradise

Global hotel giant Marriott’s 5-star W hotel in Bali-Seminyak, Indonesia promises guests a “stay in paradise’. But there’s trouble in paradise for workers at the hotel who attempt to exercise their basic rights.  Please join the protest.