This week we call your attention to Labourstart, who are a nonprofit offering help and support to working people around the globe. As you know, we use their web site to look for human rights issues in the world of labor. Please donate to support their work.

This week we look at the the Dongria Kondh tribe that inspired millions when they won a ‘David and Goliath’ battle against mining giant Vedanta Resources. The tribe vowed to save their Niyamgiri Hills and their self-sufficient way of life.

Now their lands and lives are under threat again. Their leaders are being harassed by police and imprisoned under false charges. The Dongria feel the government is trying to destroy their community in order to allow mining.  Please post their story on all your social media and help generate pressure on the Indian government. Please open the link to hear from the people themselves.
https://assets.survivalinternational.org/films/36/embed

Find a campaign to work for. Light must be made to shine in the darkest of places. We invite you to join Freedom United        and help end slavery in the supply chain of the soft drink business in the US.

Nineteen year old, Noura Hussein Hamad Daoud, was sentenced to death on 10 May for killing her husband in self-defense after he tried to rape her for a second time. A Court in Sudan, on 29 April, found her guilty of the murder of her husband Abdulrahman Mohamed Hammad. Noura’s case highlights the failure of the Sudan government to tackle the tragedy of early and forced marriage as well as marital rape.

Luis Marroquin, José Can Xol and Mateo Chamám Paau, three land and territory defenders from different communities in Guatemala were killed in less than a week. Guatemalan authorities must take action to fully investigate these crimes and ensure that other defenders can carry out their work without fear for their safety.

Trần Anh Kim was convicted and sentenced to 13 years’ imprisonment for “carrying out activities aimed at overthrowing the Peoples’ administration” in 2016. At 69 years of age, his health is deteriorating and according to his wife, “may not survive his lengthy imprisonment” as authorities have denied him adequate medical care. A prisoner of conscience, Trần Anh Kim must be immediately and unconditionally released.

Urgent Action: Up to 20 Years in Prison on Trumped-Up Charges

Ahmed Mahloof faces charges of “terrorism” and “obstruction of police duty” for taking part in peaceful protests, along with charges of “false reporting” for two tweets about the police service. If found guilty of the trumped-up and politically motivated charges, the independent Maldivian politician could face nearly 20 years in prison. 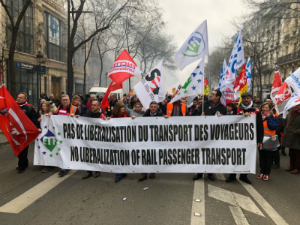 The French railway workers have expressed their strong disapproval of the proposed reform of the railway system leading towards privatization.
Please show your support by sending your message to the French government. If it comes up with my data, simply erase and put in your own.