This week, in recognition of International Women’s Day on March 8, we turn our attention to the Fistula Foundation. Fistula is a childbirth injury largely eradicated in the developed world, but still devastating women in the poorest countries. It leaves the woman incontinent with catastrophic results for her family and social life.
It’s treatable with life-transforming surgery.

On 22 February, the Governor of Texas commuted the death sentence of Thomas Whitaker hours before he was due to be executed. It was the first such act of clemency in Texas since August 2007, a period which has seen nearly 150 execution in the state.

On 10 December 2003, the Whitaker family – mother, father and two sons – went out to dinner in Fort Bend County, Texas. When they returned home, Christopher Brashear was inside. The parents – Patricia and Kent Whitaker were shot, as was their younger son Kevin Whitaker. Patricia and Kevin Whitaker died, but Kent Whitaker survived his serious gunshot wounds. He would later learn that it was his other son, Thomas Whitaker, who had planned the killings and known that Christopher Brashear was waiting inside the house to shoot the family. In March 2007 a jury convicted Thomas Whitaker of capital murder. At the sentencing, the defence argued that the defendant was remorseful, had offered to plead guilty in return for two life sentences, and that neither his father nor members of his mother’s side of the family wanted him sentenced to death. The defense noted that the state was not seeking the death penalty against Christopher Brashear, who was sentenced to life later in 2007.

On 20 February 2018, the Texas Board of Pardons and Paroles unanimously recommended that Governor Greg Abbott commute the death sentence. This was the first time that the Board had made a recommendation for commutation since 2007 (see https://www.amnesty.org/en/documents/amr51/139/2007/en/). On 22 February, with the execution hours away, Governor Abbott signed a proclamation accepting the Board’s decision and commuting Thomas Whitaker’s death sentence to life imprisonment without the possibility of parole. He stated that the Board’s decision was supported “by a totality of the circumstances in this case so long as Thomas Bartlett Whitaker is never released from prison”. He said that Thomas Whitaker had agreed to “forever waive any and all claims to parole” and that this agreement constituted “an essential and indispensable element of my decision”.

The Governor also noted that Christopher Brashear, who had actually shot the victims, was sentenced to life while Thomas Whitaker “who conspired to kill his parents and brother, but did not actually shoot the gun that caused the murders, was sentenced to death”. Finally, the Governor noted that the prisoner’s father, Kent Whitaker, “passionately opposes the execution of his son”. In a separate statement, the Governor added that Kent Whitaker “insists that he would be victimized again if the state put to death his last remaining immediate family member”.

In that public statement, Governor Abbott noted the unanimity of the Board’s recommendation as another factor in his decision, and pointed out that “In just over three years as Governor, I have allowed 30 executions. I have not granted a commutation of a death sentence until now”. Texas accounts for 548 of the 1,469 executions in the USA since they resumed in 1977 under new capital laws approved by the Supreme Court in 1976. There have been four executions in the USA so far this year, three in Texas and one in Florida.

Alain Didah Kemba, spokesperson of the Chadian youth movement IYINA, was unconditionally released on 26 February after being presented before the prosecutor. Three days earlier, he had been released from detention for health reasons. He was having difficulty standing as he reported that he had been beaten during an interrogation while in detention. He was never formally charged.

Alain Didah Kemba, spokesperson of the Chadian youth movement IYINA (we are tired in local Arabic), was unconditionally released on 26 February after being presented before the prosecutor who decided not to charge him. On 23 February, Alain was released from detention for health reasons. Before this release, his lawyer told Amnesty International that his client could barely stand on his feet as Alain said that he was beaten on his leg joints and the soles of his feet by police officers during an interrogation.

Alain was arrested early in the morning on 19 February by a police officer. Later that day, the police spokesperson told the media that Alain had been arrested by a police commander while he was about to burn a tire with gasoline he was holding in a bottle. His lawyer was also told the same thing when he went to the Police Headquarters to ask about his client. On the same day, the Public Prosecutor told Amnesty International that he knew nothing about Alain’s arrest or his whereabouts.

Alain was never formally charged and had denied ever being in possession of a bottle of gasoline at the time of his arrest. He said he was on his normal morning run and the police arrested him as he was running past a tire.

Over the past two years human rights defenders and government critics have been repeatedly repressed in Chad as dissent has been growing over President Deby’s victory for a fifth term and austerity measures taken by the government to counter the economic crisis. Alain has been a vocal critic of the government speaking out against the austerity measures and has participated in several peaceful protests organised by IYINA.

Urgent Action Update: Student at Risk of Deportation to Afghanistan

18-year old student  is at imminent risk of being deported to Afghanistan, a country she has never been to. Despite the rise in the number of civilian casualties in Afghanistan, Norway has declared Kabul safe for returns. Should Taibeh Abbasi be deported to war-torn Afghanistan, she would be at serious risk of human rights violations.

The State of Alabama called off the execution of Doyle Hamm late on 22 February after the lethal injection team was unable to find an accessible vein over the course of two and a half hours. The governor should now commute his death sentence.

Nguyễn Ngọc Như Quỳnh, known as blogger Mẹ Nấm (Mother Mushroom) was secretly moved over 900km away to a prison with deplorable conditions, that is far away from her family. Currently serving a 10-year prison sentence and denied access to her medication, there are serious concerns for her deteriorating health.

The US authorities are preparing for possible detainee transfers to the US naval base at Guantánamo Bay, Cuba. President Trump has ordered the Secretary of Defense to make policy recommendations by 30 April. The last detainee transfer to the base was in 2008. 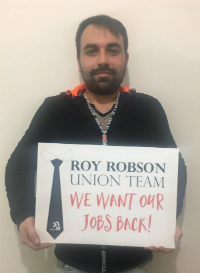 German clothing company Roy Robson has fired eleven union members from its factory in Izmir, Turkey. The company is a major sponsor of Bundesliga football teams Werder Bremen and VfL Wolfsburg. The Izmir plant employs 600 people, and textile union Teksif has tried to organize it for some time.

However, when workers join the union, the company fires them. A total of eleven union members have been fired this year. The manager has refused a meeting, saying that on principle, the company never meets with unions. Please click and join the protest.