For many years the Titan community allowed itself to be represented in blogland by the eponymous satellite of Saturn. Alas, accumulated bugs have wiped out Titan and we must start anew in a different blogger .  Prometheus (looking forward) will continue the task of musing and links about people and politics, with an emphasis on human rights, as seen from the little Olympus of The Mediterranean Towers at Nordiya. His beloved Pandora will help just as she helps shepherd the F ring.  Both of them also orbit Saturn from much closer to the planet.

Prometheus as seen by Cassini

got to marry Pandora

after Prometheus was bound to a rock where a bird ate at his liver every day, all this for giving fire to humans.

The thin F-ring is held in place by the joint gravitational effects of Pandora and Prometheus. 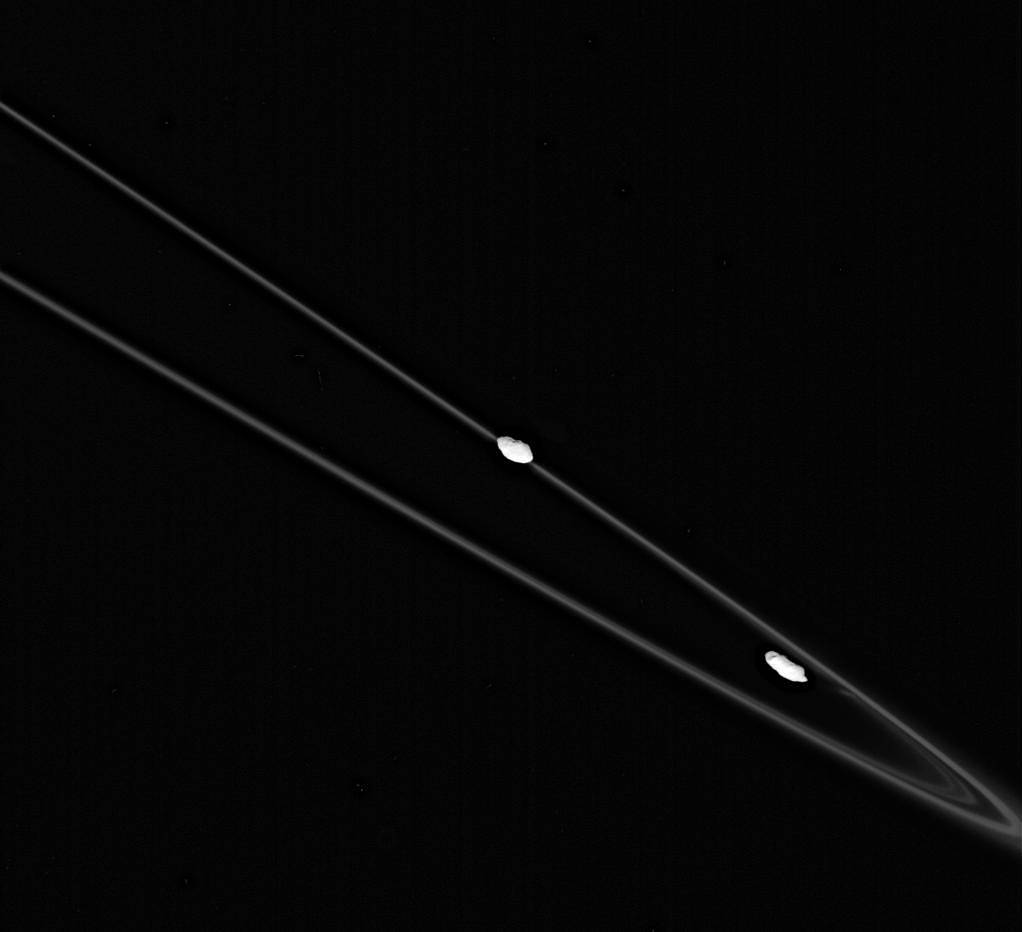 This spectacular image shows Saturn’s moons Prometheus (at right) and Pandora (at left), with their flock of icy ring particles (the F Ring) between them. Pandora is exterior to the ring, and closer to the Cassini spacecraft here. Each of the shepherd satellites has an unusual shape, with a few craters clearly visible.

The effect of Prometheus (102 kilometers, or 63 miles across) on the F ring is visible as it pulls material out of the ring when it is farthest from Saturn in its orbit. Pandora is 84 kilometers (52 miles) across.

Image credit: NASA/JPL/Space Science Institute
Now that we have introduced our dramatis personae, we can get back to our blog.

Prometheus, Pandora and friends mourn the passing of our friend and colleague Akiva Bar-Nun, professor emeritus of planetary science at Tel Aviv University. His research covered wide areas in the field including:

He also served as Director General of The Israel Space Agency,1989-1993 and as its Vice Chairman,1993-1995. He joined our Department of Geophysics and Planetary Sciences in 1976 and rose through the ranks. He retired in 2007 but continued to be active in science for many years after his retirement.

In addition to  laboratory simulations of space environments such as the atmospheres of Jupiter and Titan, comet nuclei and comae,  he was an active participatant  in spacecraft experiments from Comet Halley in 1986 to the orbiter and lander of comet Churyumov–Gerasimenko in 2016.Akiva had a great interest in the origin of life on our planet and taught a course on the subject in the Faculty of Life Science at our University. We append a list of his publications.

In addition to being a great scientist, Akiva was always a
delightful friend and colleague. We shall miss him sorely.

RANTS AND RAVES OF THE MONTH

Prometheus, Pandora and their friends have been watching the performance of President Trump with awe and disbelief. It is clear that he has no idea how to carry out his task and the future of the American people indeed appears dim. One might argue that they brought this upon themselves (certainly true of Netanyahu and Israel), but Trump is in a position to wreak havoc on the entire planet. Populist rabble-rousers of his type have replaced liberals and democratic leaders in countless countries around the world.

Melik Kaylan, writing in Forbes, tells us what to expect and on which democratic institutions not to rely to rein in Trump and his Republican Party. Miklos Haraszti, a Hungarian author and director of research on human rights at the Center for European Neighborhood Studies of Central European University, describes, in the Washington Post, how the system works and how it turned Hungary from a post-Cold War democracy into a populist autocracy. It took just a few years and the process is complete. The same things happened in countries all around the world, in Russia, in Georgia, in Turkey, in Poland and Hungary, to name a few. Suddenly the reins of power and the nuclear codes have been put into the hands of a disturbed child, as stated well by Maureen Dowd in the NYTimes.
Please join Amnesty International who are protesting in the USA
against the impetuous and fascistic actions of Trump. We append the following letter from AIUSA and call upon you to open the link and donate.

“Law-abiding Americans, who also happen to be Muslim, are facing serious threats in President Trump’s America – including calls for a special registry and a dangerous climate of hateful rhetoric and hate crimes.

Amnesty has been mobilizing our grassroots activists and has been working with decision-makers in Washington to demand scrutiny of Trump’s nominees and their intentions.

We need you to support our urgent work with a financial contribution. Our priorities are:

Now is not the time to stand on the sidelines and watch. Now is the time to act. Please join us and make a donation. ”

One might have thought that land theft is something that happens in places such as Brazil and Peru where logging companies and mineral prospectors drive indigenous peoples off their land while the government looks aside. In fact, in Israel it is done by the government in the occupied territories. The government is pushing a law that would legalize the seizure of Palestinian land for the building of new Jewish settlements. Haaretz in an editorial points out that this turns Israel into a criminal state that deserves sanctions. The bill would allow the state to declare private Palestinian land on which settlements or outposts were built, “innocently or at the state’s instruction” as government property, and deny its owners the right to use or hold those lands until there is a diplomatic resolution of the status of the territories.

In the meantime, the illegal settlement of Amona, built on stolen Palestinian land,   has finally   been evacuated.     We link you to the update site of Haaretz. We regret that the day turned violent. The height of effrontery i.e. chutzpa was reached when a lawmaker from the rightist Habayit Hayehudi party compared the evacuation of Amona to the rape of woman.

“When someone rapes a woman it hurts. What they’re doing here now is a brutal rape. They’re going to remove innocent people from their home,” Bezalel Smotrich, who arrived at the outpost early Wednesday, told the Ynet news website.
Prometheus says innocent people my ^&&((@!

53,240 53,240 Retweets
106,181
It is as idiotic an action as can be imagined. Of course, he is
desperate to distract the public from the criminal investigations
against him. Obviously he should resign, but do not hold your
breath.